Our Sunday Team and An Update On Our Progress. 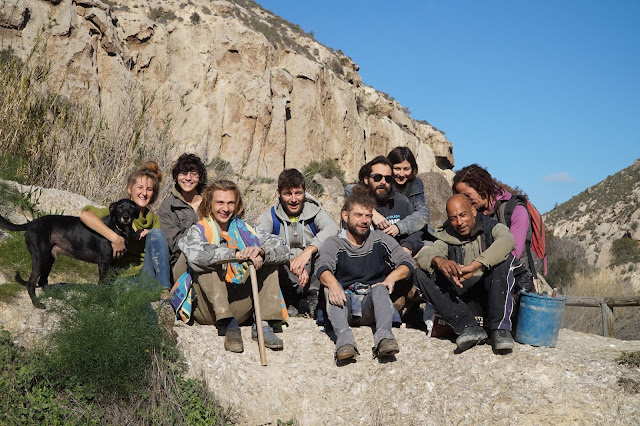 We took a free day on Three Kings Day, so, fair enough, we are working on Sunday. A great team intentional and determined to restore our Irrigation Line.

Here is an update on our progress:

The most labour intensive job is still in the main tunnel running from the Nacimiento to the Line itself. We have removed about 30 tons of sand, gravel and rocks and there are probably about 20 more tons to remove. Today the team removed 4 tons, so if we keep up the pace we could have the tunnel clear in a week, however, it is sensible to be conservative and to do a thorough job, so probably a bit longer than a week. !

The open sections of the line will not require a lot more work. The "horseshoe" is nearly finished and Graham Savage has done great work above the Ram Pump, which he has also nearly finished. There are two more points which will need some digging. They do not look too serious.
Our routine is to work for an hour or two on the open line and then for two or three hours on the tunnel work. We are happy working, and have only taken the three main "holiday days" off since the inundation.

Water for the village.

I am using my primary pump which can delver up to 75 meters, to pump water from the river directly to my top depositos which also feed  Enrique, Timbe and Antonio. We have a pipe laid along the top Irrigation Line running into Daniel's deposito. I have E mailed Daniel under a separate Email in relation to this usage. We have 40 tons in the tank and we can pump water around the village from there. My secondary pump has a delivery of up to 35 meters should it be needed.
So, all in all, there are a lot of repairs to do excluding the Irrigation Line which is well in hand. Terrace walls have collapsed in various areas and will need re-building. This would be a serious Dry Lands Management work for Sunseed Desert Technology - to save the land from massive erosion - re-building paths in the village especially from Timbe to Tom and Jessie....
Antonio has done a great clean up job on his collapsed wall, as have John and Noella who flew over from America.
We are happy and well, and morale is high.